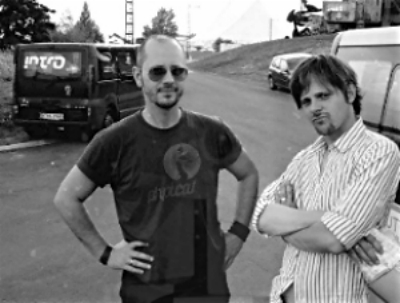 Booka Shade have always seemed to delve into the darker side of Tech-House music. Regularly straddling the lines between club anthems and minimalist industrialism, the German duo of Walter Merziger and Arno Kammermeier have been building an iconic series of works by which they’ll be known years from now. Their 3rd full length release, The Sun & The Neon Light does nothing to shed that weighty burden, and in fact pushes it further into an entirely new direction. Coming in the wake of their 2006 album Movements, which garnered them accolades and the 2008 Beatport award for best Tech-House artists, this album is bound to draw comparisons to that world beating record.

The club scene takes the back seat on this ride though, as Booka Shade push into a more typical song structure, including vocals and traditional instrumentation. Obvious influences that spring to mind are Carl Craig and Depeche Mode. The mood varies from track to track, from the symphonic outpourings of Outskirts, and Duke, to a more traditional club track like Charlotte, then back to the traditional vocal tracks like Control Me, and Psychamaleon – both of which show a heavy Dave Gahan influence. The sound even hints at a country twang on Dusty Boots.

The diversity in the tracks is noticeable, even while the cohesion of the album is obvious. The talent of these German maestros is in full force on this album.