There Is No Other Way

If you thought touring in a van in Canada was a challenge, try doing it in a canoe.  Toronto songwriter Peirson Ross is making it happen, having embarked on a 900 km North Eastern canoe tour from Georgian Bay to Montreal with filmmaker/adventurer Frank Wolf.  The tour is to celebrate the release of Peirson’s latest album Wild Ones (stream) and to pay homage to the very essence of Canada – the wilderness. Like modern day Voyageurs, Peirson and Frank are travelling by canoe on the same water veins as the First Nations did when they populated the lands 10,000 years ago.

Ross describes Wild Ones as a homesick project that prompted him to reconnect with his roots. Written in his New York apartment, Peirson plays each of the 20+ instruments, also designing and creating the beautiful artwork. Each tile on the cover holds a paper-cut image of one of sixteen endangered species of Canada, and along with the songs, he intends for them to “represent the ten provinces, three territories and three oceans that reside within these fragile habitats.” Peirson’s aim was to marry “art, music, and nature in an album dedicated to wildlife and to those living the wild life.”  This is for the wild ones.

Stay tuned here for updates and track the tour here.  Here’s one of my favourites from the album, “No Other Way”. 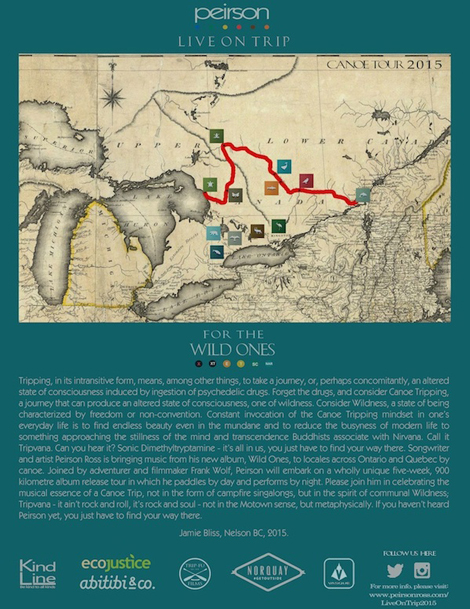