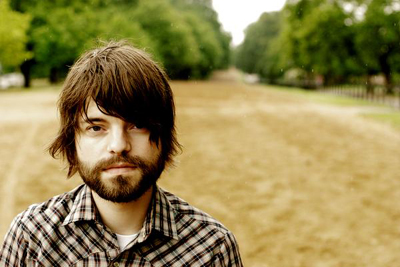 While checking some of my favorite blogs, I ended up with a couple mp3s on my computer by Tim Williams.

Kudos to Dovecote Records for putting out Tim’s latest record When Work Is Done. A home to Aberdeen City and Mason Proper, I’ve always thought this label has a good ear for talent. Do you think he looks a little shaggy?? Someone took off with his beard trimmer, his glasses and his computer (which had close to 100 of his demos on it) after his Brooklyn apartment was broken into. This was a day before he was set to do pre-production on this record. Deciding to hurdle this challenge, Tim recalled 50 or so songs and recorded them on a four-track recorder, 25 were selected to be laid to tape with UK producer Dave Lynch (The Duke Special, The Late Greats).

The result is “a strikingly confident work that boldy drifts from keyboard-laden marches (To And From Tomorrow), to earnest Americana (Lessons) and fuzzed-out electro balladry (Out There)“. Sounds kind of like Ryan Adams and something else I can’t quite figure out right now. Can you?

Check out Novel. Here’s the video. Find more of his songs at his website, myspace, or two old songs I found at his label.