This weekend is Beats, Breaks and Culture at Harbourfront Centre. Always my favorite of the summer programming, this year features Winter Gloves, DD/MM/YYYY and Holy Fuck tomorrow, with Broken Social Scene and Keys and Krates on sat. Tons of other stuff going on as well. Check the schedule for more details.

Last Gang just signed the Montreal band Silver Starling, who have held a spot in my ‘to write about’ notebook since who can remember when. Its the project of Montreal’s gentle giant Marcus Paquin, who after years of collaborating on, recording, producing, and mastering innumerable music projects (Stars, Torngat, Arcade Fire) decided to write some songs of his own. The addition of drummer Liam ONeill (Zeroes) birthed the name while the addtion of Marika Anthony-Shaw (Arcade Fire), Peter X (Parkside Jones, Sevens Project) and Gab Lambert (Marathon) rounded out the group. The debut was mixed by Peter Katis (The National, Interpol) and Marcus himself, to be released in the fall. All of their tour dates, including tomorrow night at the Drake, are below. Try Closer at myspace. 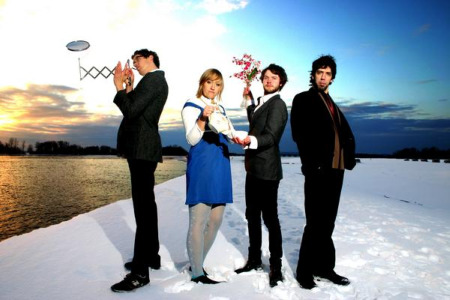