A Place To Bury Strangers touring with Holy Fuck 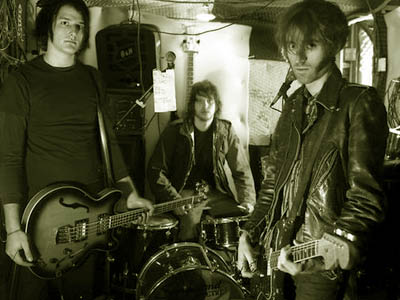 So Holy Fuck have announced a series of 2008 winter tour dates (none of which include Toronto by the way), touring alongside New York’s A Place To Bury Strangers. Their name evokes any number of things. Mass graves? The basement of a Serial Killer? The public cemetery where Jane and John Doe end up? Perhaps the record collection of any indie music critic?

Speaking of the latter, if one were to cobble together the works of The Velvet Underground, The Jesus and Mary Chain, The Cure, Joy Division, My Bloody Valentine, Iggy and The Stooges, Yo La Tengo, Sonic Youth, Dinosaur Jr., Echo and the Bunnymen, The Replacements, Brian Jonestown Massacre, Black Rebel Motorcycle Club, The Dandy Warhols, and toss in a bit of Bauhaus, and Nine Inch Nails for fun… you might wonder when the wall of distorted guitar and synth would end, and the droning lyrics would start.

That’s pretty much the vibe you’d get from the act that’s currently touted as the “loudest act in NYC”: A Place To Bury Strangers. Funny how I’ve come full circle in 3 paragraphs isn’t it? Check out their video for I Know I’ll See You below, and also have a taste of To Fix A Gash In Your Head, and Missing You. You can also listen on their MySpace page here.

« Currently Listening To » The Blood Lines