I can always write something about something I like.

Check out your next soundtrack to eating dinner with friends. Here’s Requiem For A Scene by Vancouver’s Brasstronaut. They’re a 4-piece band who use trumpets, flugelhorns, trombones, piano, double-bass and soulful lyrics to get the message across. Influenced by jazz and classical backgrounds, with inclinations towards indie pop music, the band has created an interesting introduction with Old World Lies (out on Unfamiliar Records). People in Canada are starting to take notice with CBC radios 2 and 3 featuring the band, as well as solid opening slots lately for Why?, NOMO and Woodhands.

I don’t hear the trumpet too much with stuff that comes across my desk. Its a nice change. 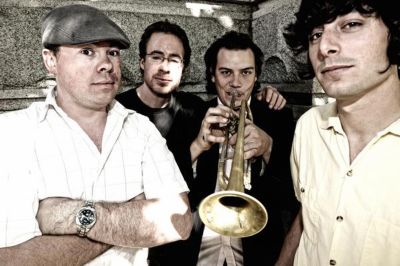 « For Your Love by Marching Band » Bored? Kill some time here..