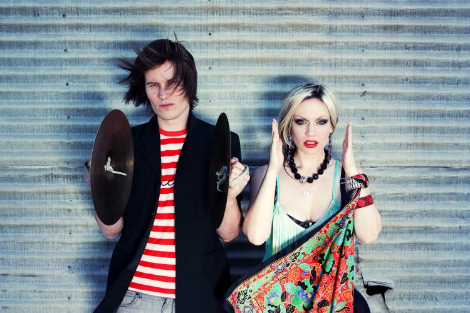 From what I could tell, it looks like Canadian Music Week had another successful year.  Clubs were busy, the hotel was buzzing with industry and just about everyone had their drink on.  Here’s some of the things that I saw:
WED:
-While perusing the Royal York hotel on Wednesday afternoon, I ran into Killbeat Publicity Ken Beattie, who after a few pints, brought me along to the Horseshoe to see Saskatoon band Violent Kin.  Their energetic live show seemed familiar, as I’d seen the brother/sister duo of S.J. and Maygen Kardash in their earlier form of SK band The Bloodlines.  Enjoyable performance though, check out Velvet Hideout.
-I spent a few hours around Ossington, catching a good portion of Amberhaze‘s set at the Painted Lady.  I always love to see ambient one-man-band’s perform; subtlies and minimal effects might have been lost on the festival audience though.  Looking forward to spending more time with the 2011 EP Raleigh.
-I jumped over to the Dakota for my monthly dosage of gritty blues-rock in The Coppertone, duo Amanda Zelina and Nick Skalkos, with Morgan Doctor on drums.  Heavy stuff, and loud as hell.  Here’s what it looked like.
-I finished the night watching Ireland’s Sacred Animals perform at the Painted Lady.  The thing I love about music festivals is having the opportunity to see International bands come to town and perform those songs I’ve loved, read about and posted on blogs months before.  Picture perfect vocals, would have loved it with a full band or symphony.
THURS:
-Like I mentioned here, I was super impressed by Miracle Fortress‘s set of new material at Lees Palace.   It’s a lot dancier than previous songs.  And our only clues so far are WITW?  Keep your ears peeled for a track called “Miscalculations”.
-I jumped down to Queen for the Windish showcase featuring Young Empires and Memoryhouse.  The former were their explosive selves.  They’re probably turning a lot of heads in Austin right now.  The latter, started slow, but near the end finished on a strong note.  “Lately” was great to finally hear live, but I’ll always remember this band as something to put on for quieter days, rather than an extraordinary live performance.  Time and place kind of thing.
FRIDAY:
-After bailing face first while jumping a concrete barrier, I headed to Sneaky Dees with some Maple Music folk for a performance by Montreal’s Nash.  Had never heard of the band, might look into them a little more.  For fans of Cake, Beck, Spoon.  Check out their song “Sad Robot Harmonies“.
-Finally met Zachary Lucky in person, right before he played a solid set at Free Times.  Loved the cover of “These Days“, makes me sad I missed “Town To Town“.
-After that it was back to Sneaky Dees to see both Bravestation an Allie Hughes kill it.  Keep an eye on these two artists.
-The remainder of the night was spent outdoors, missing sets and enjoying a buzz.
SATURDAY:
-Even though I wasn’t able to attend any of the showcases happening that night, I did catch a panel called “Music In Visual Culture”.  It was essentially the festivals’ tv/film/Music Supervision Panel, and like most that happen at these festivals, there’s never enough time to cover everything.  The Panel did a great job but its quite a huge element of the music industry that I’ve taken years to get used to and understand.  When time was up, the eventual swarm of attendees cornered all the panelists.  Happens every time.  Tv/film is the new radio.
« Video: “Cheenese” by Pompeya (vid slightly NSFW) » Currently Listening To: Slowriter