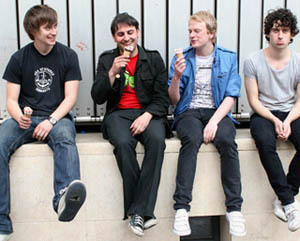 Dublin four piece Delorentos will be featured at the Music From Ireland Brunch at SXSW in Austin next month. They’ve toured with the Futureheads, Tapes ‘n Tapes, and seminal post-punk heroes Gang of Four. Their infectious brand of indie pop rock has garnered them enough acclaim to warrant a nomination for the Choice Music Prize for best Irish Album (their equivalent to the Canadian Polaris Prize), as well as two Meteor Awards (the Irish equivalent to the Juno or Grammy awards). The tracks Basis of Everything, and Eustace Street both caught my ear.

Check out their MySpace, and have a look at their video for their song Stop below: