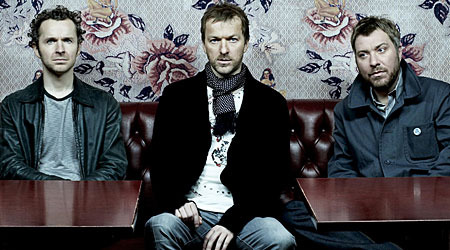 Live music is such an interesting thing for me. I never really end up in the middle. I either completely react to the music or nothing happens at all. I’ve noticed its getting less frequent that I am the former, luckily for the Doves show last night at Kool Haus, I reacted. Goosebumps, nostalgia and hearing things with different ears on.

The set was filled with songs off the bands’ four album history, mainly showcasing the new album (Kingdom Of Rust), which has been a pretty popular go-to album around here. The lead-off track (Jetstream) started the show, as well, we here heard ‘Winter Hill’ and the title track ‘Kingdom of Rust’. And from the time I’ve spent with the record, I had no idea how much the songs ‘The Outsiders’ and ‘House of Mirrors’ would blow my mind live. Outsiders has this great lick (think Elbow‘s ‘Grounds For Divorce’) through the middle that killed live. Mirrors ended up in the 4 song encore. Real standouts.

Digging into the past, Doves also performed a healthy amount from The Last Broadcast. ‘Words’ and ‘Caught by The River’ were sing-along crowd favorites. They finished the encore with ‘There Goes The Fear’ with the video (below) projecting on to the band and backdrop. I felt nostalgic while listening to ‘Pounding’, which I feel is their best song. Years ago, while unemployed and a couple days into owning a digital camera, I set out to make a video for the song. Check out the clip. No future Spike Jonze here.

If there was anything the band didn’t nail it might have been ‘Snowden’, off Some Cities. Seemed as if the band couldn’t find the right tempo to play the song in. Not a big deal compared to what the band did right. Quite an experience.