There is a band I’ve loved since my late teens.  Back then, I used to be the typical indie alternative kiddo, listening pretty much to anything that had guitars in it.  Because it was cool.  I firstly came across Boat Club in 2008.  I was happy to be introduced to the electronic drums and fall madly, profoundly in love with them.

Boat Club are Andreas Christakis and Magnus Wahlström.  They come from Gothenburg, Sweden.  And I bet you already know about those facts.  They have been called “pop balearic” band.  I have no idea what that means in all honesty, I never understand what those labels mean.  All I know is that their music is quite similar to the feeling of waking up by a bunch of caressing sunbeams, at a sea resort, in mid June.

I literally jumped with happiness when I found out that our beloved label/home Cascine would reissue their EP, Caught The Breeze. Pure bliss!

And of course, I cannot find any words to describe my enthusiasm about St Etienne remixing Boat Club‘s “Memories”.

To have a proper BC feature over here, and to get you all on board (because you have to!), I got the chance to chat a bit with Magnus.  We talked about inspiration, dreams and wishes, hometowns and memories.  Here it is, enjoy.

S – When and how did it all start with Boat Club?
M – Me and Andreas had been making music for years, going from improvisational drunken noise making (trying to mimic every Sonic Youth song we ever heard), to punky pop, to dreamy shoegaze pop (trying to mimic The Radio Dept). (We also had a brief period of slick swedish pop, à la Labrador, something we regret, dearly). This was in 2006 and we decided we wanted to explore a more electronic sound, using drum machines rather than real drums etc. We brought a couple of songs with us from our “Citylights” demos, rearranged them, and released them on “I Wish I Was Unpopular”. We made our first two gigs at a boat club in the GBG harbour, and at a barn in the woods of west coast Sweden, as Society. Soon to be changed to Boat Club.

S – What’s the inspiration behind your lovely and sunny tunes?
M – We spent most of the summer of 2006 listening to Radio Dept, Slowdive, The Wake and so on, going to techno clubs, drinking wine all day in the sun. It carried a certain feeling of a (dreamy) paradise, in our little otherwise rainy town of Gothenburg. We didn’t think too much about any of it though, we didn’t speak of any certain sound, just started recording basically. I think, although having become regarded as a sunny summer record, we wrote it over the fall, winter and spring, in memory of the past summer and the wishes for the next. I always find inspiration of that weird feeling between hapiness and melancholy, and i think the songs have that too. I never regarded it to be purely a sunshine-spring break record. I even find it somewhat dark and chaotic, but with a light and dreamy touch. It’s more about feeling summer in the dark winter, than experiencing summer in the present i guess.

S – You are still based in your hometown, so are we. What’s the most special thing about Gothenburg? Do you feel at times that Boat Club are far from where the “real action” takes place? (Sometimes, I do feel that way, that is why I am asking…)
M – Gothenburg is like family, there is an undefineable connection to it. It’s a rainy, cold and ugly place, but you still love it, you know? It has it’s magical places too though. It’s small enough to be cosy, but big enough to have a living cultural scene. It’s also a down to earth place, warm and real. No huge pompous dreams, we know we ain’t much so we remain modest. Gohenburg will never be the centre of the world, we accept it, and don’t strive for it. But i can really relate to the feeling of all excitement happening elsewhere! but maybe that’s how it feels everywhere? It’s more exciting to watch a scene from the outside than from within? From the outside view you see all these bands coming out of some place, imagining them all to live together, creating art like a big living organism. Perhaps it’s never that romantic in real life. But of course i imagine it to be exactly like that in other places!

S – Which band or artist would be the most ideal to team up with?
M – Oh there are so many! I often find myself hearing a song, wishing to have been part of it, or possibly becoming a part of it in some way. But Cocteau Twins of course.

S – What gets you into a creative mood?
M – Listening to inspiring music really, finding new great artists. It has been happening alot lately actually, so much exciting stuff coming out. At least at our end of the world things have been pretty slow for a couple of years, but things are certainly brewing again here and there!

S – Suggest a movie, a band/artist and/or a book that everyone should know about.
M – Book: “Das Parfum” by Patrick Suskind, and De Saint-Exupéry’s “Little Prince”.
Music: Cocteau Twins (to be obvious), and Fint Tillsammans (because way too few people know about them).  Also a small but significant nod to Bouquet, and especially their song “Summer Swirl”. These bands have had a huge impact on Boat Club, just to mention a few.
Movie: Hotel Chevalier.

S – Realism or dream mode?
M –  I trust science, i love documentaries, but on the other hand I can’t help drifting away to dreamy music or a good movie. So i guess i need both to co-exist. They do complete each other perfectly.

S – As this year is coming to an end, would you share a wish of yours for the next year?
M – I wish for the sea to get the sky in the end, and make a pink fluffy baby cloud.

This post was written by Sarah P of Keep Shelly In Athens, as part of their Takeover of Indie Music Filter. Find the duo online or Sarah on twitter. 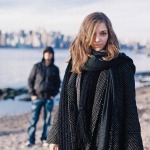 « Dreaming Of Getting Inspired (Keep Shelly In Athens Takeover) » One Song Covered, In Three Ways