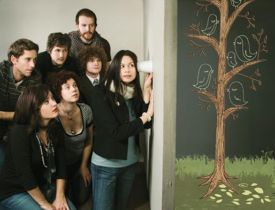 Who : Woodpigeon from Calgary.

What : Mark Hamilton from Woodpigeon has every right to give me shit about not having written anything about his band since starting Indie Music Filter . We met last year while navigating Moose Jaw at the WCMA ‘s. At the time I was totally unaware of the band, but took some listens to their last record Songbook and an October ’07 mix of the song below (which might not sound that different). It was not enough to keep them on my mind, but Mark kept me in the loop, sent me the new record (Treasury Library Canada ) and officially made me a fan. Still getting into the record here but have really found it reveals itself on more and more listens. For fans of Page France , Earlimart and wait for it…. Sufjan (they still get that one alot). The band is really on the move, heading over the pond to play shows with Calexico and others in the UK and a date at The End Of The Road festival in Sept.

« The Deer Tracks » Covers for your friday