Matt Mays: anyone ever been on tv?

I was in a commercial in high school for a product called Game Genie. It’s a device that people bought for their Sega Genesis gaming systems that would help beat hard levels, get infinite lives, etc. Along with 80 other grade 10 students from my high school, we were picked up in a bus with the now classic line ‘hey buddy, want to be in a commercial?’. My first experience with The Pusher.

The commercial was kind of lame when I remember it. But fun I guess. Fondest memory of the night was when the food table was pillaged.
>

This picture just came across my desktop.

I’ve been listening to Matt Mays for a couple years, ever since I heard the song ‘City of Lakes‘. I suggest you go check out one of his live shows if you like a sound that crosses between Tom Petty, Neil Young and Blue Rodeo. He’s coming to Toronto (from the East Coast) for Canadian Music week, but apparently sticking around longer to shoot a video for ‘Time of your Life (’till you’re dead)’ off the new record ‘Matt Mays and El Torpedo’.

You can listen to this record all the way through, its solid with some classic gems in there. If you can find them, check out ‘Stand Down at Sundown’ and ‘What Are We Going To Do Come The Month Of September’, 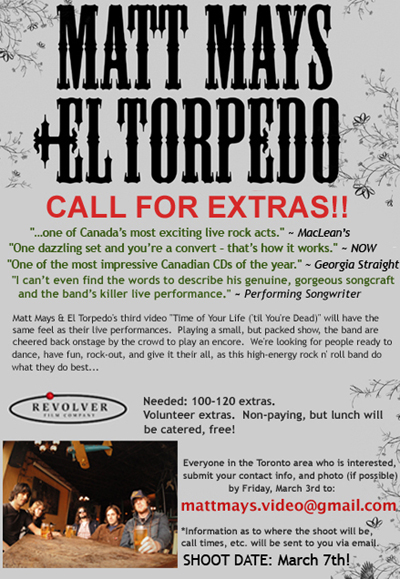