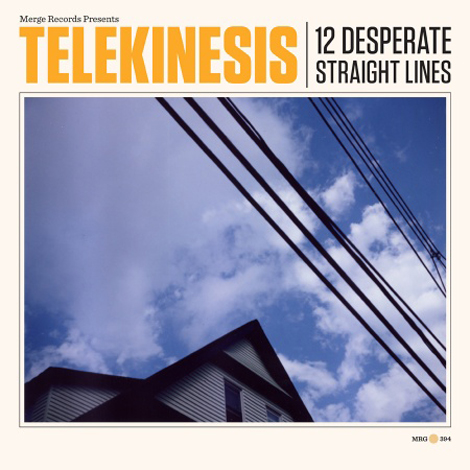 While preparing three song pitches this afternoon, I took a break to hear whats coming up from Telekinesis. On Feb. 15th, Merge will be releasing the bands sophomore album (12 Desperate Straight Lines) on CD, LP and digital. Earlier in July, things looked bleak forTelekinesis frontman Michael Benjamin Lerner , as when he went to start recording the songs for this record, found himself with no band, a case of vertigo (had that) and a wrecked van. Through a 9 to 5 regiment of writing songs in Berlin’s warehouse district to Portland where four more songs took shape from a bass guitar, Death Cab‘s Chris Walla helped put it all to tape. The new record istwelve new songs of heartache, anger, and even a little hopefulness while the lineup becomes Jason Narducy (Robert Pollard band, Verbow) on bass and Cody Votolato (Jaguar Love, The Blood Brothers) on guitar.
The van has wheels again and Michael is seeing straight. Keep an eye out for this one to start strong in 2011.

« White On White by Fredrik » Listening to more @perfumegeni…