New To My Ears: The Temper Trap 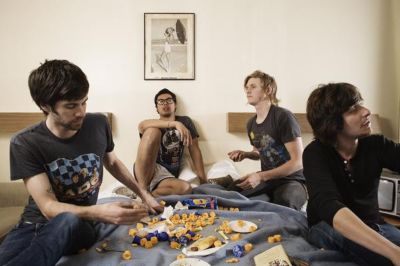 Confirmed both on the panel I did this weekend at WordCamp and again on this posting, Indie Music Filter has a pretty consistent theme when it comes to the content that I put up on the site. It’s to the point. My goal is to really act more like an introduction or referrer when it comes to new music. Not too much more than that, I rely on the audience to dig deeper.

This is a good thing. You really don’t want me going on and on…

Introducing The Temper Trap from Australia. This group, new to our radar here (probably because I don’t have many Aussie friends sending me music), have toured their homeland in support of some big international bands (Modest Mouse, The Dears, Kasabian and Cold War Kids) and are now making the jump out with what looks to be showcase dates (not officially) in London late Oct, USA early November.

Coming from their new record, produced by Jim Abbiss (Arctic Monkeys, Bjork, U.N.C.L.E), check out something you’d think was a mix between TV On The Radio, Radiohead and a slight emo-ish feel to the vocals sung by Indonesian lead singer Dougy.

Judge for yourself, here’s the single (Sweet Disposition). Stream It Below.

[audio:https://www.indiemusicfilter.com/audio/SweetDisposition.mp3]
« We now have a video gallery » Shelter by The Dead Trees