Shelter by The Dead Trees 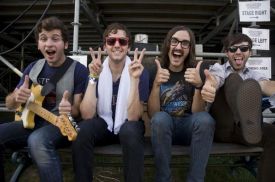 Who : The Dead Trees who formed in Boston, now reside in Portland.

What : A band simply doing garage well; two guitars, bass, chaotic drums and an unforgettable vocal melody belted out towards the last row in the audience. Since garnering a lot of support for last years Fort Music EP , they supported Albert Hammond Jr . on tour, this year they’ve moved on to another Stroke . Look for them in November touring with Little Joy . The debut full length (King Of Rosa ) will be released digitally (Oct. 21st) and on Vinyl (Nov. 4th) on Milan Records . If you’re up for digging up more, check out their Daytrotter session from last year.

« New To My Ears: The Temper Trap » For Your Love by Marching Band