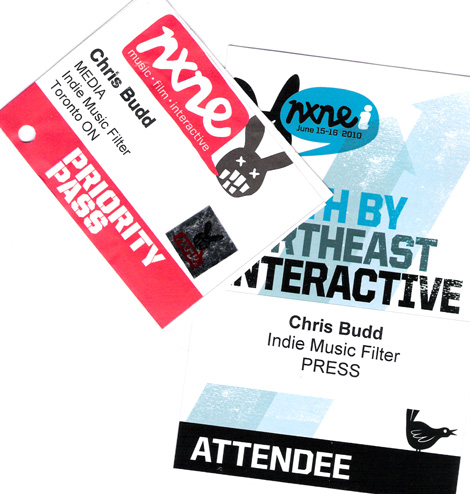 I could tell right away that this years NXNE was doing better than it ever has before. The festival which took place last week featured a solid band and film line-up, a new (and sold-out) Interactive conference component and what turned out to be the biggest free rock concert in Toronto in the last 40 years with Iggy Pop and the Stooges performing at Yonge and Dundas Square. The official stats is that during the 7-day festival, more than250,000 fans saw over 650 acts on 50 stages. Those are some big numbers for this festival that is become more of an international destination for bands and music industry alike.
Here’s what I remember:
NXNE Interactive: Enjoyable and something I’m going to look forward to in future years. I attended panels on UnMarketing, Community, Consumers Becoming Creators and one called The Death Of The Critic. While all panels were different in nature, I noticed they always came back to key fundamentals in being successful online; reaching and engaging your audience and giving the consumer control.
NXNE Music: Wednesday. Didn’t do too much other than attend a launch party for the festival. I was at the Courthouse to see Arkells and Kathleen Edwards perform. It was one of four launch parties that night actually (something new in this years festival), including an Audio Blood showcase up in the CN Tower.
NXNE Music: Thursday. This turned out to be a night of seeing bands I worked with but also catching performances by Free Energy and Young and Dundas,Imaginary Cities, Young Galaxy and The Besnards Lakes at the Mod and Bishop Morocco at The Drake. It was my second time seeingFree Energy and the outdoor stage at Y&D square combined with sunshine, is definitely the best was to see this band. Imaginary Cities were an excellent surprise, who you’ll probably see me blogging about in the coming weeks. Young Galaxy showcased some great new material andThe Besnards Lakes killed it live, like usual. Albatross might be one of my favorite songs to see live. Bishop Morocco‘s set was not nearly as engaging, until the end where they performed their poppier side in ‘Last Year’s Disco Guitars‘.
NXNE Music: Friday. Juggling office time and time spent at the festival, I had a little afternoon sun at the Kelp Records Bar-b-que watching Chris Page as well as Musebox‘s Live In Bellwoods series featuring a great performance by Make Your Exit. Evening showcases had me jumping between Dark Mean, Old Man Luedecke, Neutral Uke Hotel, By Divine Right and Rich Aucoin. All shows exceeded expectations. Really recommendNeutral Uke Hotel though. Seeing the audience sing every song with the band seemed like therapy for fans still going through NMH withdrawl.
NXNE Music: Saturday. I was happy to see that Volcano Playground are getting better and better, but the night was kind of a bust. Missed showcases, bad performances and Julianna Barwick cancelling on the festival (I only found out after biking across the city to her schedule set time). It happens. After that point, I called it a night.
« Video: “Up In The Clouds” by Darwin Deez » Putting Cloud Nothings on my r…