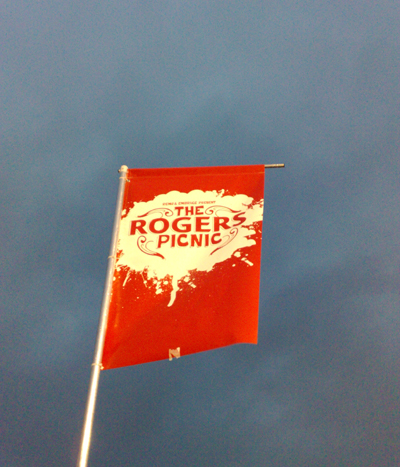 Not even the rain could keep people away from heading to see the Rogers Picnic at Fort York. I’ve gotta say, its was a pretty run well run event and it looked as if most people enjoyed themselves. I wasn’t too sad that I missed The Carps or Burn Ruffians (living in Toronto there are many opportunities to see those bands). We caught the tail end of Dizzee Rascal‘s set on the way in. Vampire Weekend took the stage as we got our first beer.

The band I enjoyed the most were Animal Collective. Isn’t there supposed to be four guys in that band? Well, even though they played along to a lot of pre-recorded music adding flourishes of guitar lines and drum fills, I was totally into their set. Oddly enough, when they started playing Panda Bear‘s Comfy In Nautica it started pouring again. I didn’t mind. 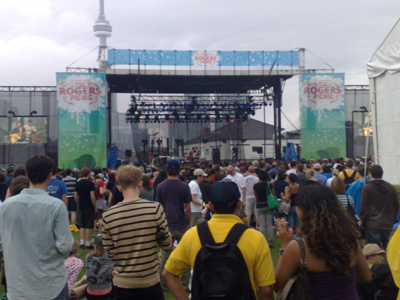 Chromeo and Tokyo Police Club played the next two set times and did the best out off all the bands in trying to make a soggy Toronto crowd move and shake it. It was great to see Cat Power seduce the crowd and City and Colour did well to wrap up the day. 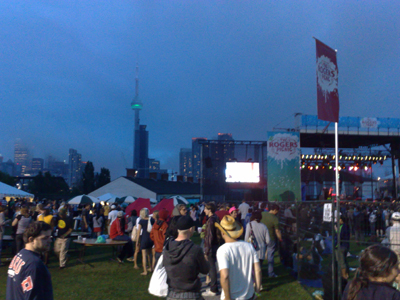 Now that this concert is over, I’ll be giving my Rogers phone (Nokia N95) back to Rogers. My thoughts? I really got the impression that this device was designed as a camera first, which they improved by putting a phone in it (kind of the reverse of what most cell phones are like). The 5 megapixel camera produced some great snapshots and the video recorder worked seamlessly. I’d recommend this for people who are really about taking pics and videos of their friends.

The N95 had a huge amount of features, most of which I got a chance to check out. I surfed the web on the phone’s browser and I tried a video call at the concert. If I had the phone for longer, I might have gotten into checking out the devices ability to send e-mail, instant message and chat.

The one thing I didn’t like about the phone was the software it came with. It took a while to install and generally ran pretty slow on my computer. Designed to coordinate your computer with your phone, it found it too bulky (perhaps becuase I’m used to using iTunes and the iTouch).