Walk on Water (Auspicious Beginnings) by The Rest 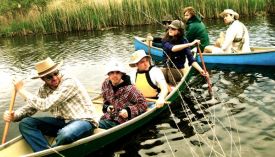 Who : The Rest from Hamilton, Ontario.

What : One of two singles from the new release from Hamilton’s The Rest . The album (Everyone All At Once ) is the bands sophomore effort, but so far sounds like its from a band that’s been playing together for longer. I agree with I Heart Music ‘s mention of frontman Adam Bentley’s similar vocal sound to Alec Ounsworth of Clap Your Hands Say Yeah , but musically, I’d say you’d like this band if you’re into The National , The Arcade Fire , or Secret Machines .