Ship by Throw Me The Statue 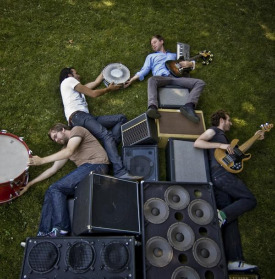 Who : Throw Me The Statue from Seattle.

What : In a lunch table discussion this weekend I heard about something called a ‘Best Of’ party from a friend of a friend (Mark). I don’t know all of the details, but from what I understand, everyone who attends the party has to compile a list of their top ten albums of 2008 as well as a mixtape featuring their best songs off those records. Each mixtape is played, while its curator is subjected to praise, criticism, or disqualification based on a strict list of rules. Apparently, everyone liked Fleet Foxes , MGMT , Vampire Weekend , and Bon Iver . Mark told me he threw in Throw Me The Statue (their album Moonbeams ). I remembered how damn catchy their song Lolita was, but I couldn’t recall the rest of the record.

Throw Me The Statue have got a new EP which came out yesterday titled Purpleface (Secretly Canadian ). The EP features the songs ‘Ship’, ‘Honey Bee’, ‘That’s How You Win’ and a reworking of ‘Written in Heart Strings’ (from Moonbeams ). Below is Ship , and how cool is that chorus? A great mosaic of converging melodies and instruments.