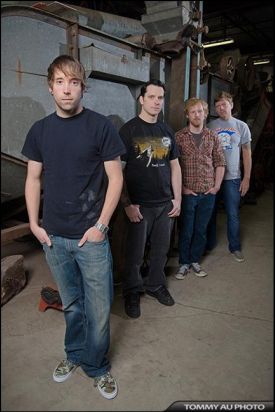 Who: Carpenter from Vancouver.

What: Give a listen to the tune Six Shots off the band’s upcoming debut album, Law of The Land . Their music is heavily influenced by John Cougar Mellancamp , Bruce Springsteen , and is described as FarmCore. Made a name for themselves by vehemently promoting sustainable farming practices, playing Vancouver’s Live Earth concert, and attracting the attention of Jack Daniels Distillery enough to be featured in a national ad campaign in the U.S. Carpenter will be touring across Canada this summer alongside fellow political punks Strike Anywhere of Washington, D.C. (they’re playing Toronto on June 12th).