I didn’t accomplish much when I was a teenager. The best I could do musically was play bass in a band called The Daily’s, win a battle-of-the-bands at the El Mo and put out a two song tape with studio time we won from the show. If I had the mp3s handy, I’d post Kidnapped Girl and Camel, songs which I’ve found did not stand the test of time. On the other hand, if we had the talent of the kids in Spiral Beach, who knows where the band could have gone.

Spiral Beach is a Toronto foursome comprised of teenage folkie offspring; Daniel and Airick Woodhead, bassist Dorian Wolf and Maddie Wilde. They just released their debut LP Ball on Sparks music and they’ve still got that buzz. Actually, people have been buzzing about them here in Toronto for years. I’ve seen them a handful of times and I’ll admit, I initially couldn’t get into it. I came around though. Now I can appreciate their songs and their incredible ability to perform and write well beyond their years.

Here’s the video for Made of Stone. Grab the mp3 here. Super catchy and infectious. 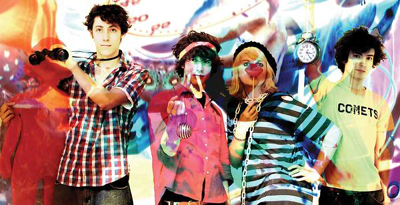