Take It In by Wye Oak 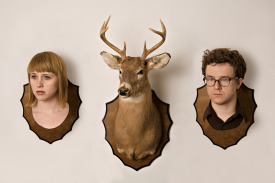 Who : Wye Oak from Baltimore.

What : Looking forward to Wye Oak ‘s sophomore effort in The Knot , to be released on July 21st. Starting out as two friends recording songwriting demos together, this basement project has been growing leaps and bounds, including tours of the US and Europe and critical acclaim. The Knot was written by the duo of Andy Stack and Jenn Wasner in rural Cumberland, MD and in their Baltimore living room.

Song : Take It In . Great juxtaposition of quiet and loud, soft female vocals and crashing drums and guitar.