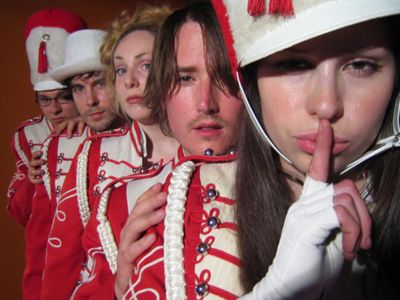 I want to know what a wet secret is. Can anyone tell me? Found this band on the CBCR3 blog the other day, check out The Wet Secrets from Edmonton.

Formed by contract in 2005 by five rye doused friends and musicians. After recording their initial album (7 days after their first gig), Whale Of A Cow started to get noticed by music fans and college radio. To follow this up, the band took a year to record the full-length Rock Fantasy (which came out this week on Rodeo Peanut, distributed by Six Shooter/Warner) while taking time off from other bands they played in (Shout Out Out Out Out, Whitey Houston, The Vertical Struts, Dirt City Films & Capital City Burlesque). The 9 song album also contains remixes by Shout Out Out Out Out’s Nik Kozub and Cadence Weapon.

Here’s the song Get Your Own Apartment.

Video below. I’d like to dedicate this song to the a$$hole that lives above me who walks around in work boots at 6:30am. Replace ‘get your own apartment’ with ‘move the hell out of my complex’. By the way, check out the ‘Rye-eyes’ in the video. It makes you do crazy things.