We recently went on a little tour around Germany and Denmark, supporting the very nice James Vincent McMorrow. He’s a good and very talented chap. Here are some photographs that we took in our time travelling around. Not time-travelling around. That’s another album. I’ve said too much.

I see myself as a kind of travel writer in the spirit of James Bond or the like or any other kind of James Bond character you might wish to think of. In that spirit, then, I give you something like a James Bond’s film but with still images instead of exploding cars and with a sense of gnawing despair rather than an international assertion that British people are still good at anything other than greasy sex in a turn-of-the-century fireplace. 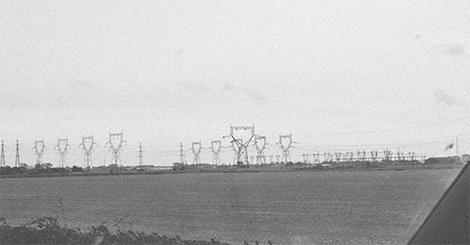 Here we have the world’s largest Space Invaders tribute, put into action by a series of giant robot owls. We were a little confused when we saw these, as we (obviously) are used to the English style of giant robot owl. I think it’s amazing how you get this kind of art installation on The Continent®, and is the kind of thinking I’d like to see more of back at home, especially in relation to the dissemination of electric power. These owls are connected by ‘slavery ropes’ which help them stay in time. You may have seen these being used by the incredible BoyBand on their latest fourth comeback tour and t-shirt. I don’t know who was playing this but the giant robot owls (or ‘Space Invaders’) look close enough to the ground to suggest that h(s)e has lost. What a twit (t’woo!)!

Now it’s time for our next picture:

This is me, Jeb, and a grey pole backstage in Hamburg getting ready to go for a run. I like to play with perspective in my mind with this one, and pretend that Jeb is innocently sniffing my left index finger while with my right hand I am sticking a fingernail in his ear and shouting at him to listen to my suggestions about the band and the way in which he insists on living his life. He eats pasta four times a day and to be honest I am sick of it. As well as a grey pole in this photograph, you may also notice that there is a radiator in there. Staying cool is very important on the road so we often insist that there is a radiator in each dressing room that must be turned off. Also, if you take them with you, radiators can be used to smuggle industrial quantities of heroin over an international border (we don’t do it)! There is also a floor in this photograph as you can see which I am standing on, and which Jeb is insisting upon sitting on a chair on. The floor is as important as a run when running when on the road. 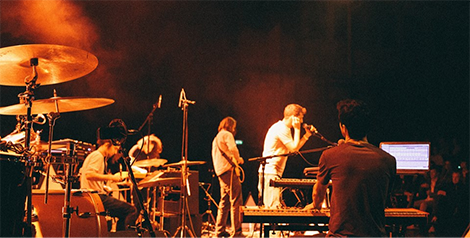 Have you ever wondered what it’s like to be just off-stage behind Ed with us? Well thanks to the career of our cameraman, now you will. As you can see, Seryn insists on having his square hat moored to the ground so it never leaves his head. This is onstage in Hamburg so you can see from Jeb’s posture that the run has done him the world of good. We drove to Hamburg from Brighton and that took us fifteen hours and we made the good mistake of having a drink the night before so here we are tired but we have adrenaline and the force of the sun to help us. In the centre of the picture and elsewhere dotted around the stage you will also see automatic machine gun turrets installed by me to get everyone to play well. The turrets will fire on activation by audience applause (which I consider to be bad). Ed is downloading some better music than us on BitTorrent and kind of doesn’t look bothered. There were more people in this photo but we couldn’t fit everyone in. 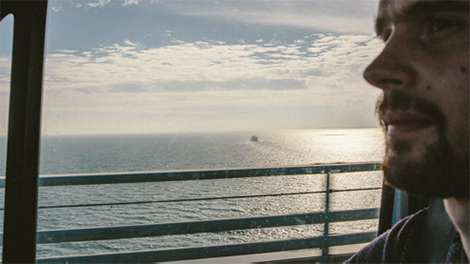 This is a picture of when we sent everything Ed loves away from Ed on a boat which is a very important part of any tour. As you can see, Ed looks very unhappy but is dealing with things very well. Hang in there, Ed! We’ll be in Copenhagen very soon and then you can listen to your music. As you can see we removed all land from this picture so the boat will keep travelling away from Ed forever.

As you can see, lighting technicians have no fucking clue what they’re doing. It might look like we are in action in this shot but we are actually not because I stopped the show to get everyone to look at my hair. I’ll do that now, aswell. Also you cannot see but I am so cool that I surfed up to the keyboard across the surface of a paddling pool, that I insisted on having, in order to play my essential F# which without which we could have ruined the song. Seryn insisted on displaying an old man’s wig on a spike at this Copenhagen gig, the reasons for which I am afraid must have left with the old man (unlike his dignity!)! Still, I am sure it instilled fear in the audience which is what we seek to do.

As you can see we are all friends in this concert and that is important when you’re on the road like we were. We spent the evening after the gig in the house of a stranger who we met outside and he gave us beer and beds and conversation and played us lots of great music in his Copenhagen attic. It’s amazing how few people are willing to violently threaten you with knives as soon as you step into their house.

Now it is about time for our next picture: 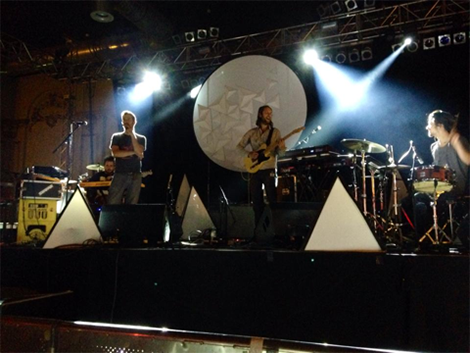 There are quite a few shots of us onstage in this collection but guess what, we are a band. James Vincent McMorrow has a violent obsession with tea and biscuits so all the time in sound-check we had to manouvre around PG tips teabags and a giant rich tea which to me looks like it has spoiled. At the end of the show quite often James would rip the rich tea from its frame and try and eat it but then shout at us for not finding a cup big enough to dip it in. You can tell I am upset from it in this picture because I am sat down and my hair looks average. Trewin is feeding wires into the underside of his chin (to ‘begin to coincide with her’) which I think is healthy and Jeb and Seryn are clearly indulging in banter about backstreet abortions. Ed cannot be seen in this picture because he is out of shot.

This was Berlin, which was the biggest venue we played.. We were held up in traffic on our way to the venue because a political leader of some sort was being taken through town in a large convoy and the whole city shut down. This made us late so it was very stressful and I think this energy of stress and urgency really comes across in this picture.

Now get your tissues out because it’s time for our last image: 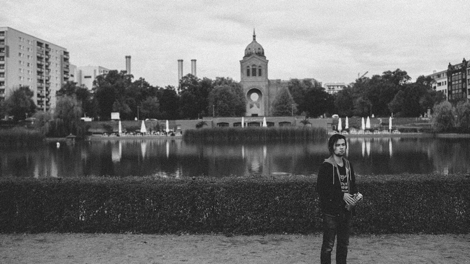 Here Jeb found a confused Asian man waiting in the park for some ducks to feed or perhaps eat. If you use your imagination you can think what might be in that box.

Well thanks for reading. I hope it was as informative for you as it was for me which is very informative indeed thanks to the joint collusion of words and pictures.

Perhaps you can join us on an image adventure another day.