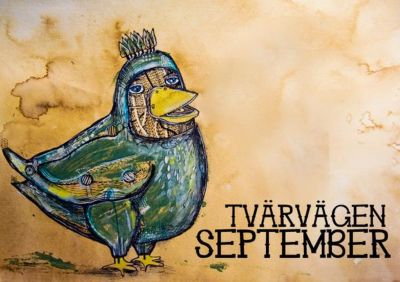 A couple days ago I read a post on IGIF about the Music Alliance Project (MAP), an idea speared headed by Jason at The Pop Cop where 15-20 music blogs were asked to choose a song by a band from their country and share the results in identical postings to “help introducing your favorite music to a worldwide audience“. Its pretty good concept for discovering music, worked for me. I do believe this sort of thing happens on its own, but I might not have heard of Tvarvagen if it wasn’t for that posting.

It was the video of that weird bird that really got me.

Tvarvagen is the name for an eclectic one-man orchestra named Henrik from Gustavsburg, Sweden. It also might be the name of his cabin filled ‘with peculiar instruments and good references; toy synthesizers and russian string instruments, Beirut, Fog and Madlib.’

The video for September is really quite beautiful, apparently created by a digital camera using the multi-photo setting with all the editing done by Henrik himself. I love the combination of the kazoos, typewriter and toy piano near the end.

Look for his debut record is out on November 6 (Knoppar).