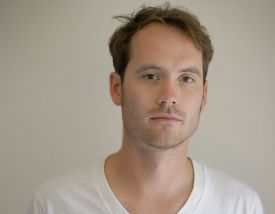 Who : Brian Borcherdt from Holy Fuck .

What : When I listen to Brian’s solo material, I’m always amazed he has the ability to hit two distinct and completely opposite musical ‘poles’. When he’s not touring like crazy in the Polaris short-listed electro-experimental band Holy Fuck, he takes time off to set up in former bandmates’ living room (Jose Contreras, By Divine Right ) and deliver 7 stripped down acoustic numbers. Little was added to the guitar and vocals so it sounds sparse and intimate, and what Eye Magazine calls “the anti-thesis of Holy Fuck’s instrumental freak-outs “. The EP is called Coyotes and has been released earlier this month by the newest label here in Toronto, Hand Drawn Dracula .

The label is run by artist James Mejia who’s not only talented with the brush (you’ve probably seen some of his album covers) but has an ear for interesting music. They did the vinyl for Wintersleep ‘s Welcome To The Night Sky , an upcoming Contrived and Off The International Radar release, as well as a pretty cool compilation featuring remixes and songs by Black Moth Super Rainbow , Holy Fuck and Shugo Tokumaru .

Song : Evil Twin . Going out to my evil twin.