Welcome To The House by Final Flash 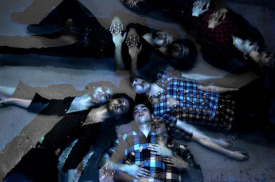 Who : Final Flash from Montreal.

What : Based on how well 2008 went for this Montreal band, 2009 will be time for them to attack. Sporting a jangly psychedelic folk-rock sound they conquered a variety of festivals (Canadian Music Week , Pop Montreal ) and showcase opportunities (Transmission , TIFF Canadian Music Cafe ). Coming up, the band will release their debut CD (produced by Besnard’s Lace Jacek) and head down to Austin next month for SXSW . I caught them a little while ago at the Horseshoe and a lot of people missed out. A little less known here than in Montreal, I predict packed shows if they keep coming back.

Song : Welcome To The House .