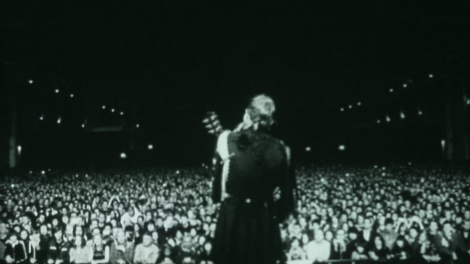 Watch this clip of Sigur Ros performing “Festival” from their upcoming film INNI (out November 7th), the bands first ever live album, or second live film (and follow up to 2007’s acclaimed iceland tour film heima).  Each copy of the special editions that are purchased will contain a “unique concert artefact”, a piece of the clothing worn by a band member over the nights of november 20-21 at london’s alexandra palace, in 2008.  Each of the band’s outfits has now been painstakingly pressed (but not washed) and then cut into neat squares which have then been put into individually numbered envelopes, each to be inserted in its own lavish special edition box, along with coloured vinyl 7-inch of the unreleased song lúppulagið, inni enamel badge, light sensitive paper and all the other goodies.