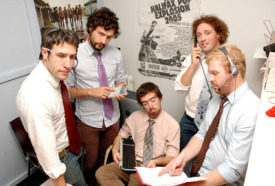 What: Six weeks after crossing the country on tour by VIA Rail, Share singer and songwriter Andrew Sisk celebrates the August 4th release of Shares ‘Slumping In Your Murals’ in Montreal.

Born from songs performed in old farmhouses and the House Of Miracles studio, the core of this bands album was put together in two weeks last summer. The band (Andrew Sisk (vocals, guitar), Nick Cobham (guitar, vocals), Kyle Cunjak (bass, vocals), Dennis Goodwin (synth, guitar) and Zach Atkinson (drums)) retreated to a cabin in the backwoods of PEI with producer Daniel Ledwell (In-Flight Safety) to put the songs to tape. The result is quite captivating.

Below is a taste, for fans of Beck‘s Mutations, Rogue Wave or Sparrow House. Tourdates are found just a little lower.

« Anywhere Else by Rikers » Paralyzed by Starlight Mints