Sooner or Later by Zaza 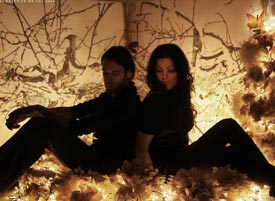 Who: Zaza from Brooklyn.

What: A perfect soundtrack for my head right now. After a weekend of travel, too much booze and not enough sleep, I feel like my head is swimming in a weird dreamlike state. From the distance, I hear a soothing ethereal rumble floating in like morning mist. Its Sooner or Later by Brooklyn’s Jennifer Fraser and Danny Taylor (known as Zaza). I haven’t heard their whole EP (Cameo, out on Kanine) yet, but if my head doesn’t snap out of this, it will be the soundtrack to my week. Check this duo at the dates below.