Head Rolls Off by Frightened Rabbit

On and off for the past couple of weeks, I’ve opened a new tab and run the myspace audio player from Frightened Rabbits’ myspace page. It was Head Rolls Off that hooked me, often getting played 3-4 times consecutively on my computer speakers.

It will be the first single off The Midnight Organ Fight (FatCat), out on April 15th. Apparently, the new record ‘maintains its predecessor’s unpretentious universality yet adds an un-scraggly grandiosity that was mostly absent from the debut’.

Hope I can get some people to see them play at SXSW this year. Last year at Hot Freaks they were great. 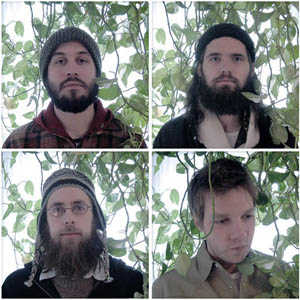 Akron is a city in Ohio, and happens to be where Alcoholics Anonymous was founded in 1935. It is also home to the Soap Box Derby World Championships, and happens to be the center of American Rubber Industry, being the founding location of B.F. Goodrich, Goodyear, and Firestone.

Family is a thing most people are a part of. Typically Family denotes a group of people affiliated by blood, affinity, and co-residence. The primary function of the family is to reproduce society, either biologically, socially, or both.

Akron/Family is an improvisational indie rock group from Brooklyn, NY. Their folksy harmonies are blended seamlessly with post-rock leanings to form a swaggering tempest of psychedelic folk-rock that displays influences ranging from African tribal choruses and drums to American Church music and Jazz.

The band will be playing SXSW in Austin, TX, at the SESAC Day Stage Cafe on March 12th, and Emo’s Jr on March 14th.

I suggest giving their track Phenomena a listen by viewing the video below or checking it out on their MySpace page here. 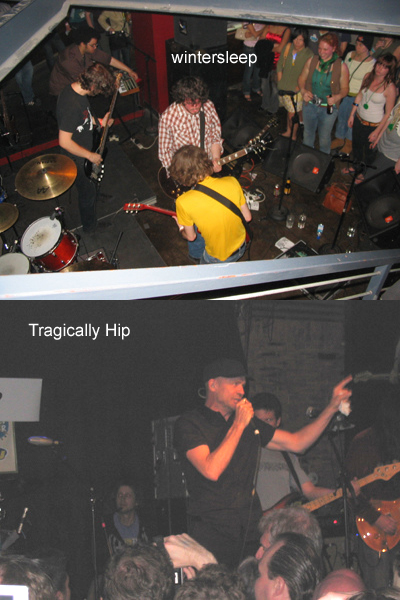 I’m starting the day at 32%. Obviously the lack of sleep was getting to me. Couldn’t even figure out a schedule for shows… It was about wandering and finding fixes that day.

Seeing the Riverboat Gamblers picked me up to around 55%.? Their lead singer avoided certain injury 9 times during his set, jumping off speaker stacks, hanging from weak beams in beer tents and standing on plastic ice containers on top of the back bar. Really amazing set, pure energy. Of which Thunderbirds are Now! had tons of as well. Saw most of their set up at Hot Freaks!, a blogger curated day party at a couple venues around the Mohawk. Could it have got me around 70%? I thought so. So I continued my brief love affair with Shiner Bock.

Cold War Kids was my last show before dinner. They played the Paste Magazine party at Maggie Mae’s on 6th. Packed. But, I still had an angle on the stage. I did arrive late, wondering if I’d missed my favourite song by the band…. sure enough, I heard the piano line bring in the song and I was singing louder than anyone to Hospital Beds. 85%.

I fully recharged at the North By Northeast (NXNE) bar-b-que at Caswell House, just outside of downtown. A chance to sit on the grass, eat bar-b-que and drink Canadian Beer! We had a great cab driver bring us to the party; in fact lucky to get one at that time of day in Austin. Swamped. When leaving, I called his cell from the business card he gave me. I got him on the phone, but couldn’t understand a word. Neither could anyone else. We said don’t worry about coming to get us…. He apparently arrived after we left, waiting 30 minutes then calling my cell 9 times trying to reach me like a crazy ex…
I bet he didn’t have a problem finding another fare.

Best show of the festival was Annuals in the Austin Convention Centre. Brought me up to 100%. The Festival had set up a sound stage to film live concerts every hour on the hour during sxsw. This meant that there was actually no bar there, but that didn’t matter. I needed to see this band properly mic’d (unlike the night before). These kids (all apparently younger than 21) rocked through Be He Me and gave us a couple new songs to digest. Again, great writing, great live show.

I jumped over to 6th to catch Adem‘s set. Not a great venue for a guy who during some songs was playing bells. The noise pollution from the bar across the street totally drowned out and downed his set. We tried RJD2 after that. Couldn’t get into it, neither could the crowd. Possibly because of a guy in the crowd with the worlds worst body odor problem…

We finished the night by seeing NY’s Pela and Someone Still Loves You Boris Yeltzin. Big fan of the records here at the filter, but it didn’t translate live the same way I thought it would. Or maybe I just needed to go to bed. I look forward to seeing these bands again in other less chaotic venues.

Possibly my least productive day bandwise. I saw only 8 of them….. And I still can’t remember what I was doing between noon and 2pm. Everything else has come back to me.

SXSW has always been about meeting people. I met Sue while on the plane from Denver to Austin last monday. We talked for most of the flight, finding striking similarities between me and my twin brother and her two sons (twins as well), both of which were working in the music industry in Austin. As well, one is currently managing the infamous Daniel Johnston. *You might need to go rent this if you’ve never heard of him. Through High Wire Music and the help of a killer street team (nice work kids), they put together a solid showcase in town that day. I saw Daniel play. Great show, the crowd agreed.

Jumping backward, I’d like to mention seeing Loney, Dear perform at the team Clermont party. It was a perfect show for that part in the day. I found a good spot right by a circular fan. The room was dead quiet. I couldn’t help thinking about a folkier version of the Bee-Gees in his sound. Really nice songs, you can find a hell of a lot of them here, check out I Am John.
After dinner a bunch of us jumped around quite a bit. Saw Montreal’s Besnard Lakes at the Mohawk and Lo Fi Fnk from the alley way behind The Beauty Bar Patio. Really liked Cloud Cult‘s performance at Emo JR’s featuring two live painters on stage.

Champion had people dancing like crazy making me wonder if the patio at Maggie Mae’s could support the jumping. Datarock were a nice surprise as well.

Menomena was a highlight as well, but I’m going to hold off on writing about them just yet. Tomorrow night I’m off to see them, Field Music and Land Of Talk at the El Mo. Great lineup.