Treaty Connector by The Danks 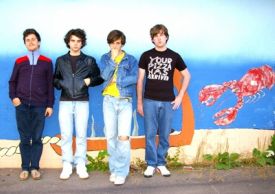 Who : The Danks from Charlottetown, PEI.

What : Canada’s east coast has birthed another band you’re going to be tapping your feet to. The Danks were formed in a small apartment in Charlottetown in ’06 and have been riding some good reaction from their EP (called Samples ), to be released officially on November 4th. They’re on the road right now with Hey Rosetta! and Two Hours Traffic (the latter being a band who the Danks share members with). The song below fits well on a mixtape between Two Hours Traffic and The Broken West . Take a listen.

« Transmission picked up during the Cold War » Busted Cars by Aderbat