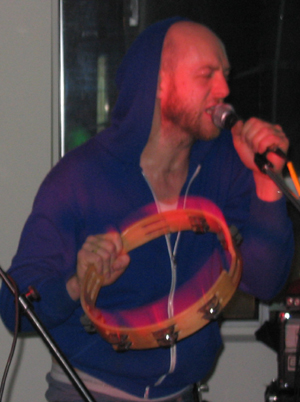 That’s Ian McGettigan from Camouflage Nights. They’d played a ‘unofficial’ showcase yesterday in a second floor loft near Much Music. I think they would have sounded better in a bar setting, but the show was very entertaining. Lots of hand claps and tambourines.

Amazing set last night by Rock Plaza Central. If I had my way, I’d throw them on a super bill with Neutral Milk Hotel…

Again, I’ve gotta go with a solid showcase for tonight. The best of the east and west coast are playing at the Horseshoe. Wil (8pm), Yoko Casionos (9pm), Two Hours Traffic (10pm), In-Flight Safety (11pm), The Golden Dogs (midnight) and Jenn Grant (1am).

Heard that We Are The Take are a solid band. They’re at Lees at 10:45. Check out Montreal Love Song on their myspace page. As well, Paper Bag Records is throwing a bash at Whipper Snapper Gallery. The Acorn (who’ve joined the paper bag family) are playing somewhere in the middle along with a special guest.